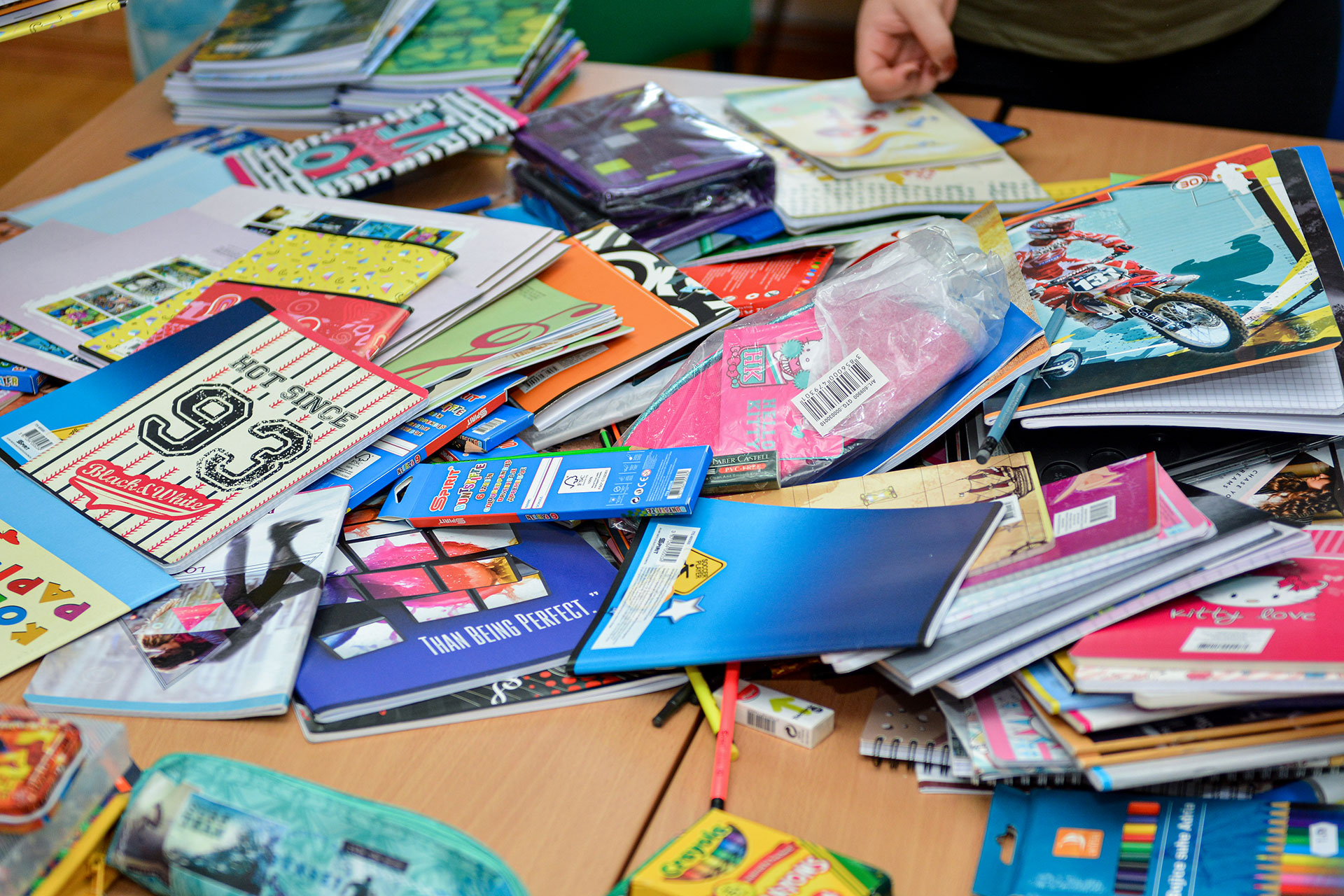 Violeta lives in Srebrenica, she is a high school junior and for the past five years she has played drums in Center for Peace and Culture House of Good Tones. That gave her a chance to travel to numerous European cities, where she took part in concerts and music camps together with hundreds of other children. In the first three weeks of her life, she underwent two surgeries, one on esophagus and one on heart.

Having explained that we wanted to tell the stories about the participants in the programs of House of Good Tones, we visited Violeta and her mother Valentina. In their apartment, there was a wood stove in the kitchen; a large living room split in two to provide a small bedroom for children;a love seat and a couch in the living room; photographs, dolls and the TV on the shelf of a large closet. The living room leads to the balcony. Below the building, there is the street that leads from Potočari to the center of Srebrenica. They say that not many people live in the town and on a sunny day it seems like everyone is out in the street. 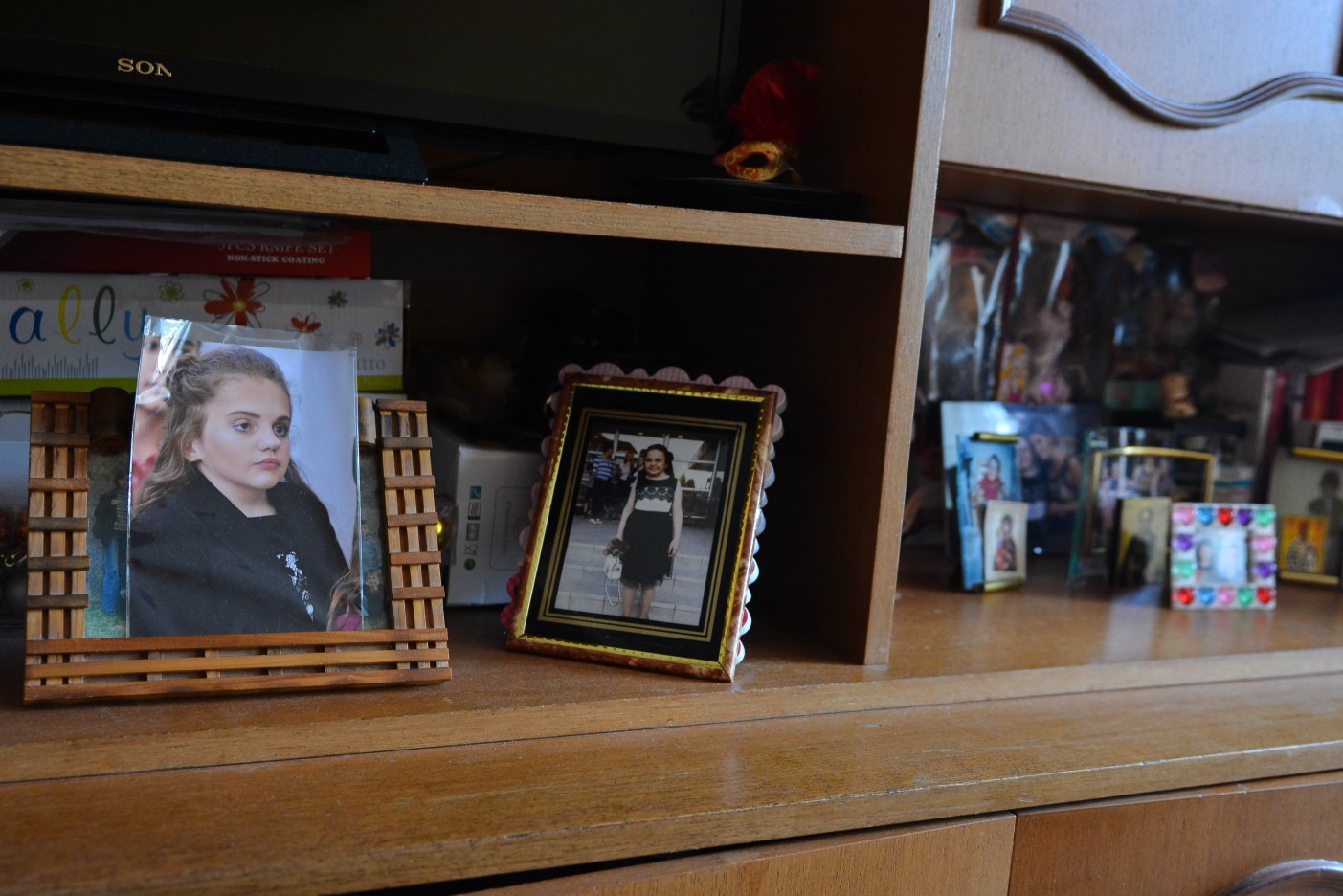 Violeta is showing a video on her mobile phone. She recorded herself in one of the classrooms in House of Good Tones. She is sitting at a drum kit and playing with the dedication of a professional. Her hands are fast and every single movement seems natural, as if it had not been learnt but given. While the video is running, her mother is talking about the beginnings, looking back at the life in Srebrenica, remembering difficult moments and showing respect for those who did a lot so that her daughter could grow up in a peaceful and healthy environment, as much as that is possible. 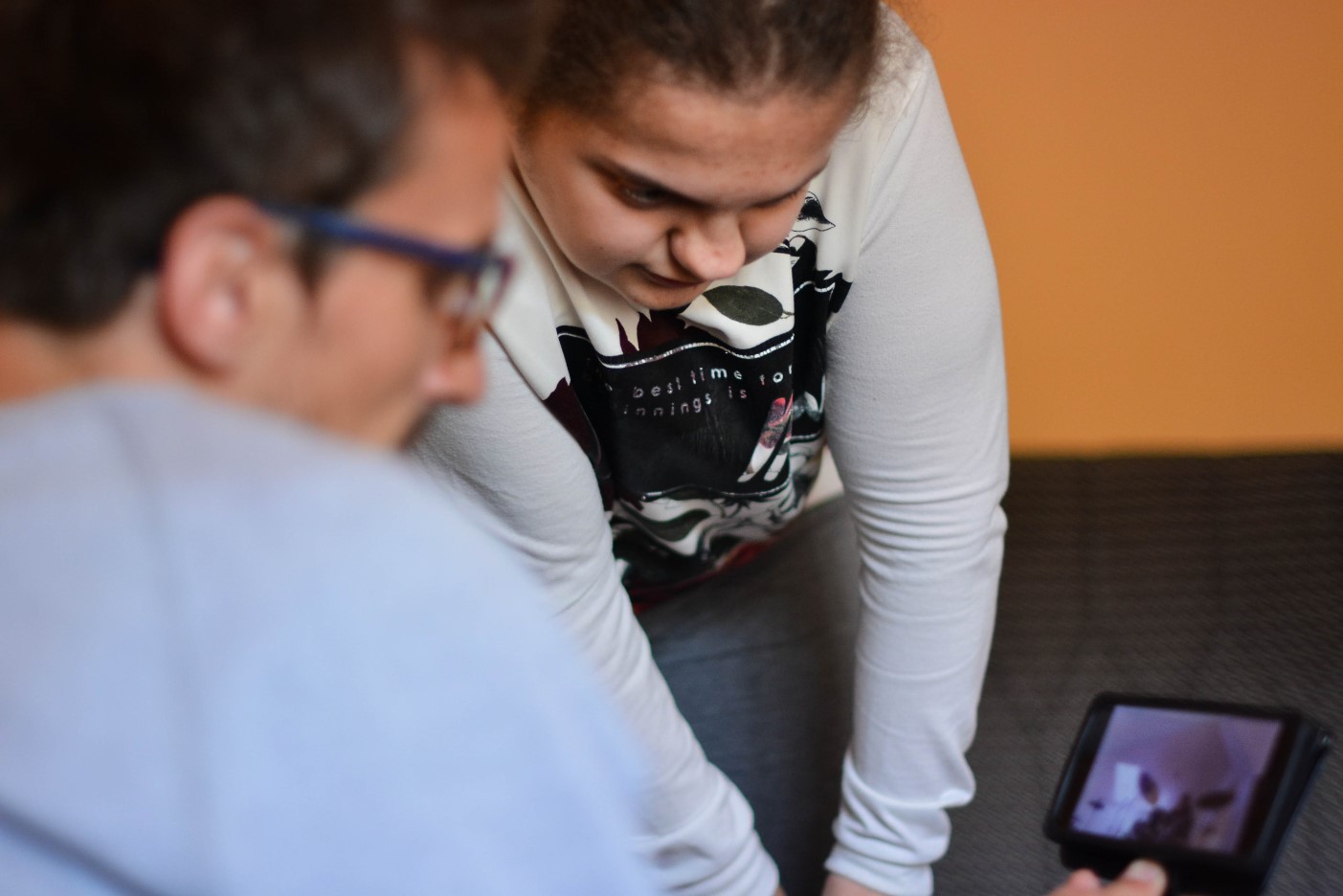 “She came home one day and told me she had enrolled in a music school. All children did it, and so did I, she said. She went there by herself and enrolled and she has stayed all these years… I’ve bought her a microphone and the headphones recently, now she sings around the house. I was afraid for her so much that I had always wondered what she would do in Srebrenica, how she would grow up, if others would have understanding for her medical condition, to what extent I could protect her, what her school environment would be like?!”

Violeta was born as the second child of her parents, who moved to Srebrenica from Bugojno in 1996. First, they rented a place and five-six years later they bought the apartment. They say that the woman who sold them the apartment lives in Vogošća, visits them regularly and they have been friends all these years. After her mother finishes a sentence, Violeta tries to give her opinion on what is being said, to add and explain. She gives clear answers to all question, allowing for her sense of humor to take over. She talks about her performances in a relaxed and cheerful manner, stressing how important it is for her to be a part of a music story. 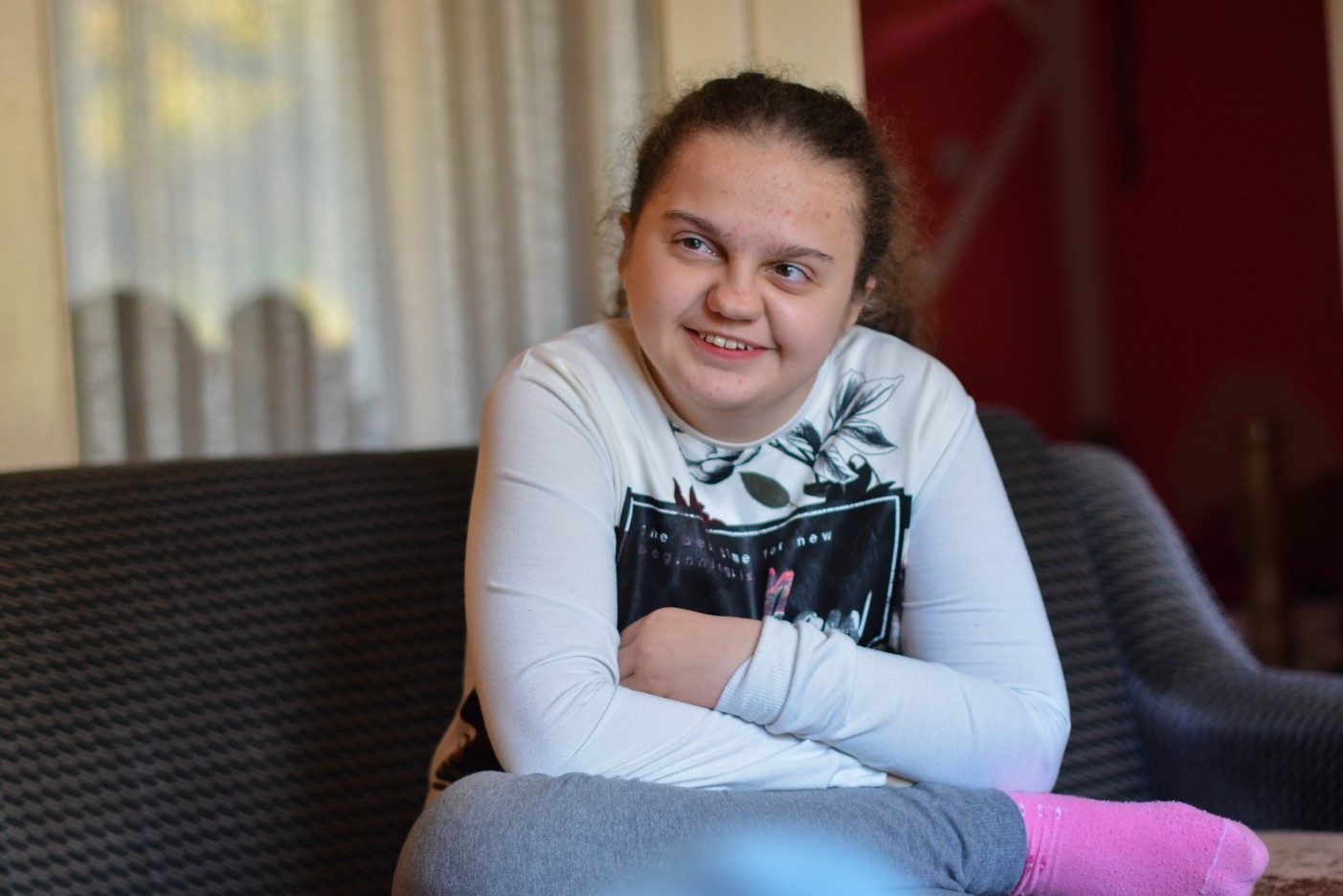 “Music is like a therapy to me. I love drums, I love the sound they produce, I love improvising and overall, it is very soothing. I never have a stage fright. Whenever I play in concert, I look at one point in front of me and tune out. My teacher tells me I am good. I guess I am?! And then, maybe I’m not, but I feel good.”

In Srebrenica, apart from school, the only place where children can have fun and socializeis street, which made Valentina, together with other parents, worry about the world in which their children will grow up.

“Ever since she was born, I’ve wondered what to do with her. There is nothing here. A playground and streets do not provide a proper environment. I talked to other mothers, in different ways we’ve tried to think of a safe surrounding for our children… Luckily, she started learning to play drums. It was a huge relief for me, because I know that she is somewhere safe and no one will disturb her. Even when they travel to concerts and camps, she calls me when she arrives, when she goes somewhere, when she returns. I have never worried.”

After school, Violeta goes to House of Good Tones to practice playing drums. Often, she arrives before everyone else, because it is easier for her to come early then to go home after school and then comeback to the center of the town where the building is located. While she is waiting for her classes she practices and when the lessons start she joins the group. In the meantime, she eats lunch provided by House of Good Tones, which makes things easier.

“What I like the most is to play drums right after school. I spend some time in the classroom by myself and it feels good. Once I was on TV, I even played in one movie. I love performing.”

When she was born in the Zvornik hospital, Violeta had to be taken to Belgrade for an urgent surgery. Her mother was lying in bed waiting to see her child. They told her that everything was going to be all right and they would show her the baby as soon as possible, but it turned out that nothing was all right. The doctors from the hospital wrapped a newly born baby in a blanket, put her in an ambulance and sent it to Belgrade. Her mother says that everyone thought she would not survive. In Belgrade, she underwent an esophagus surgery first. 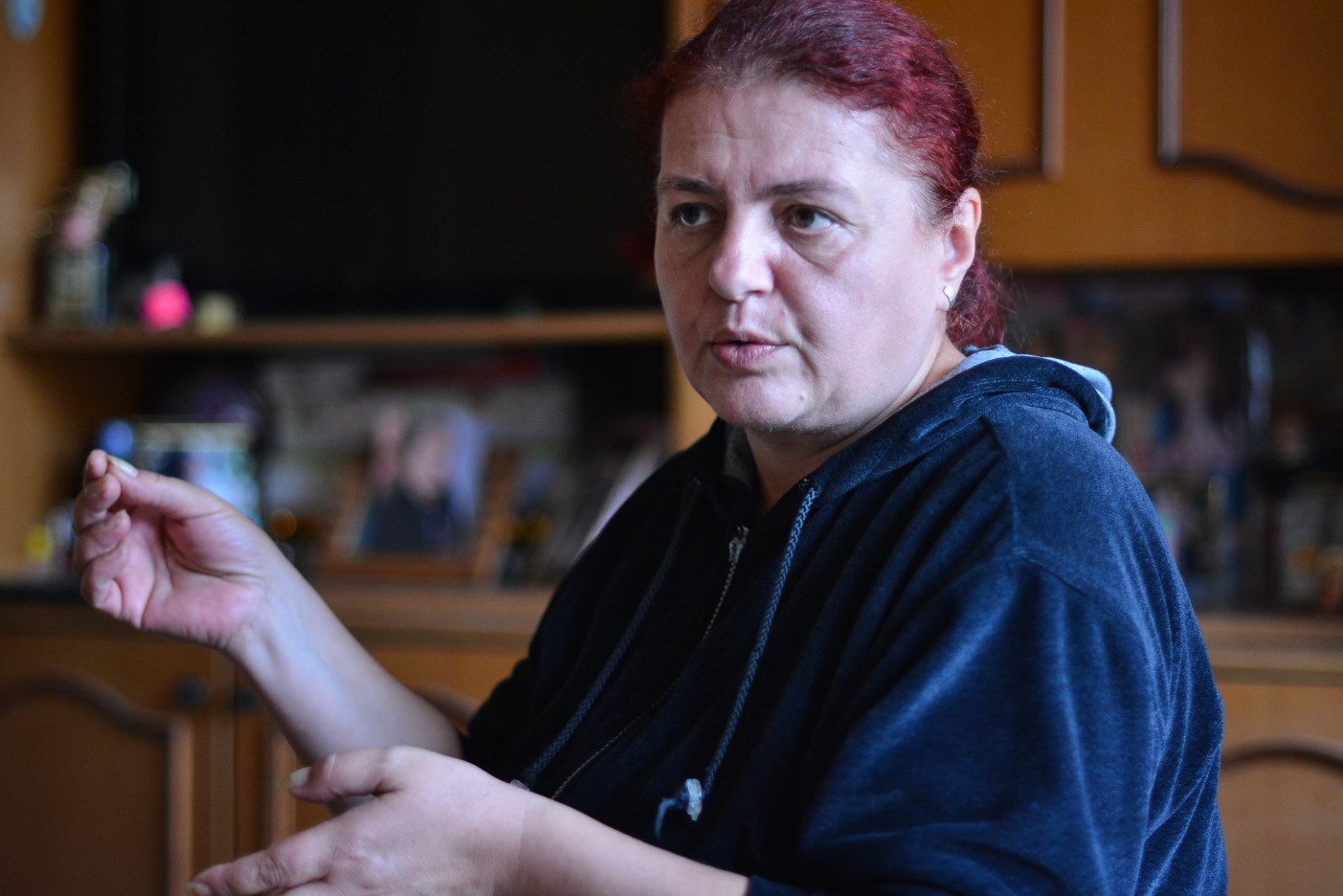 “Those were the hardest days in my life. When the surgeries were completed and when I returned to Srebrenica, she was barely alive. Later, my neighbors admitted that they were talking among themselves that she wouldn’t make it through the night. I was fighting for her life. I didn’t sleep at night, I wrote down every pill I gave her, the hour and the minute when she took the medication. I couldn’t tell the day from the night. I was praying for my child to survive. Her older sister suffered a lot because of that, but she worried about her a lot and helped me as much as she could. The most difficult day for me was when I was released from the hospital in Zvornik. All mothers were carrying their children and I was carrying bags… When they told me in Belgrade that she had to undergo the second surgery, I thought: ’My God, why her, she is so little?!’”

Years later, not only that she learned how to play drums in her teenage years, but Violeta also attended the German Language Course at House of Good Tones, which helped her during her stay in Havixbeck. She admits she prefers the rice that the cook Šefija serves during the break over the rice prepared by her mom.

“I would always tell her that her rice was not like Šefija’s, and she asked for the recipe, but it didn’t work”, says Violeta who tries to spend as much time as she can with her mother, aware that the day will come when she will leave Srebrenica in pursuit of studies, work or something else.

“Wherever I go and whatever I do, I will be what I am – responsible and hard-working. I won’t skip commitments and I’ll come to work on time. All these years, I would be ready 10 minutes before the time the bus arrives”, says Violeta, and adds that by learning to play drums, she learnt that, regardless of the circumstances, obstacles and difficulties she could be proud of what she was.

The afternoon we spent with Violeta and her mother was sunny and warm. The locals use such fall days to prepare wood for the upcoming winter. Although when days become shorter and the snow covers the street and the lights in houses die with the first dark, the streets will echo with voices from House of Good Tones. Some will practice the choir singing, the band will play a new composition and Violeta, together with dozens of other younger colleagues, will grow up in the surrounding where one can have fun, learn and enjoy. 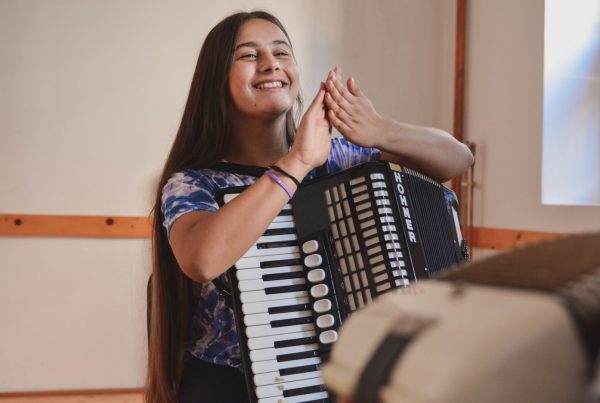 Everybody should visit Srebrenica because of people who live here 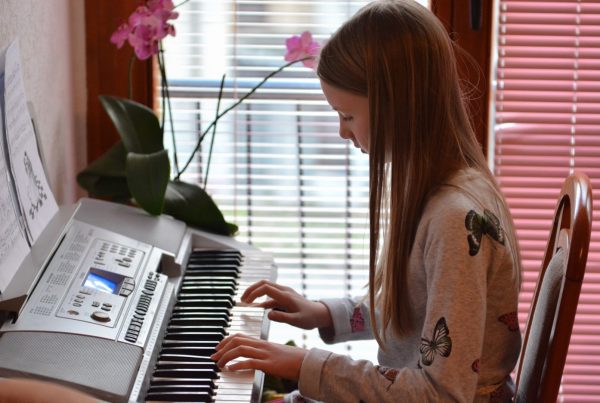 Family that sees life in Srebrenica as a choice, not a necessity 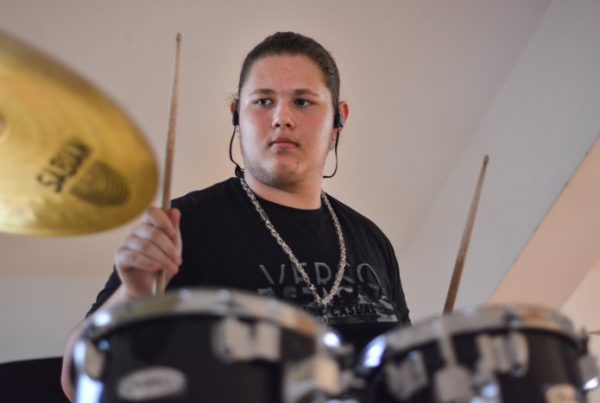